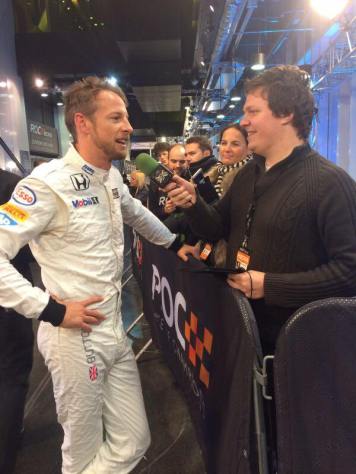 Jake Sanson is a TV presenter and sports commentator who is famous for working within the automotive and motorsport industry. Since his television debut in 2012, he has appeared on BBC1, ITV2 and Channel 5 on terrestrial television as well as on various sports channels such as Eurosport, BT Sport and Motorsport.TV on numerous occasions.

Jake has worked all over the UK as well as in France, Germany, Italy, Spain and Hungary for clients such as the FIA, ACO, Ferrari, Porsche and many other clubs, production companies and organisations within the sports industry with over 100 credits to his name in just 6 years.

He has also been a radio presenter and journalist on various stations both local and national around the country including Radio Silverstone, Downforce UK (which he also owns), Luton FM, Lache FM and Storm Radio. He is also reads audiobooks both as a narrator and an actor for ACX, which outputs his audio works to Audible and iTunes. In addition to his work as a presenter, he has appeared in the movie “The Limehouse Golem” with Bill Nighy and on the TV shows “Snatch” and “In The Club” as a walk-on character actor.

Jake is also interested by the world of comedy and humour with decades of research and knowledge in his expertise, as well as taking a strong interest in the fields of toys, video gaming, film & television, children’s literature, science fiction, modelling kits and the hobbyist industry, transport through the ages, music of various genres and a multitude of different sports and leisure pursuits. He is also a semi-professional musician who sings and plays both guitar and piano, with over 20 years experience.

He also enjoys working with children and teenagers as a JNC qualified youth worker before turning his hand to TV work, and regularly works with young athletes and personalities in his creative fields.

Jake is available for a wide and diverse range of different events, functions and projects, and will gladly turn his hand to anything from hosting live events, concerts, after dinner speaking, festivals, charity functions and more. Jake has an enthusiastic and charismatic personality, as well as a playful sense of humour and will eagerly take on new challenges and be happy to engage in any on-stage or on-screen banter for comedic purposes to help raise the energy of an event or project.

You can get in contact with Jake on jakesanson@hotmail.com for bookings or general enquiries.